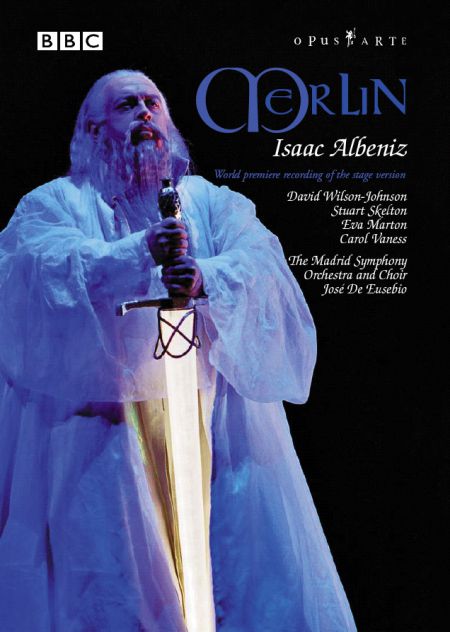 Enjoy the World premiere of the full and original version of Merlin by Isaac Albéniz, over a century after he completed the work. Albéniz composed this ‘Wagnerian’ opera to an English libretto by his patron Francis Money-Coutts between 1898 and 1902. Many believed the score was lost, until the conductor José de Eusebio reconstructed it from various manuscript sources and publishers’ proofs. For this stunning production, director John Drew created a world of magic and fantasy, using evocative sets and splendid lighting. Filmed in High Definition.

"The lost opera of Camelot takes centre stage...Camelot, the court of King Arthur, has been rediscovered in Madrid...an expectant house has been thrilled by the world premiere of Merlin, the 'lost' opera of Isaac Albéniz....the conductor José De Eusebio painstakingly reconstructed it from various manuscript sources and publishers’ proofs...colour drenched sets, with giant, glowing Harry Potter style wands and the suggestive couplings of damsels and gnomes. From its opening stage scene, as dawn breaks outside St Paul’s Cathedral in London on a Christmas Morning to the final curtain, with the sun setting behind Madrid’s encircling mountains, turning the Plaza de Oriente and the Teatro Real pink, it is easy to imagine that Camelot is here after all." (The Times)

"David Wilson-Johnson sings with authority and beautiful tone...The sets, costumes and lighting tip the balance towards a positive recommendation. Sound and picture quality are excellent and this is an opera well worth exploring for something different and unique...this DVD certainly eclipses and replaces the CD recording as a first recommendation.’" (Musical Pointers)