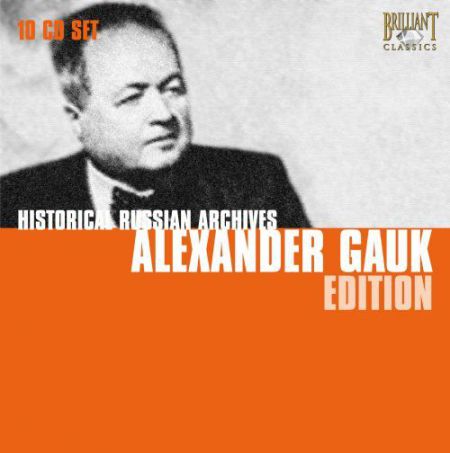 This set presents a great opportunity to become more familiar with the charismatic Russian conductor, Alexander Gauk. He was also a composer but is probably better known for his orchestral arrangements, notably of Tchaikovsky's 'The Seasons', included in this set.

Gauk also reconstructed the score of Rachmaninoff's first piano concerto from the parts in 1945, thus enabling further performances after its disastrous première in 1897. He had a preference for Russian music which is shown here, eight out of the ten CDs being devoted exclusively to Russian composers.
Many of the most prominent Russian conductors of the twentieth century were once pupils of Alexander Gauk, for example, Evgeny Mravinsky and Evgeny Sveltanov. Gauk, who died in 1963, was one of those talented Russian musicians who rarely had the opportunity to experience the western lifestyle yet his fame did reach beyond his mother country.
Apart from featuring some of today's better known symphonies by Shostakovich (Nos. 5 and 11) and the aforementioned 'The Seasons', the Gauk Edition comprises seldom performed works by Arensky, Balakirev (Islamey), Myaskovsky (Symphony No. 17) and Glinka and Rimsky-Korsakov.