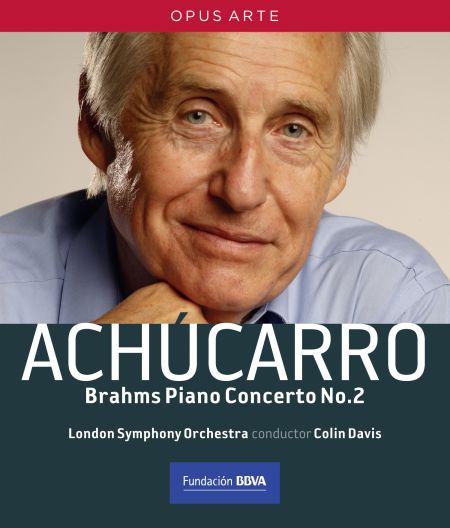 This recording commemorates the 50th anniversary of Joaquín Achúcarro’s debut with the London Symphony Orchestra after winning the Royal Liverpool Philharmonic International Competition in 1959. Recorded at Jerwood Hall, St Luke’s, London, with Britain’s eminent conductor Colin Davis at the helm, Achúcarro delivers a consummate performance that brilliantly expresses his delicate and passionate style. Extra features include a
substantial documentary about Achúcarro’s career and
performances of solo piano pieces by Brahms, Chopin, Scriabin and Albéniz filmed in the beautiful setting of the Prado museum, Madrid.

"Achúcarro’s approach is unorthodox in today’s stick-to-theletter-of-the-score, mechanically perfect musical world. His rubati seem excessive to some; to others, like a throwback to a Golden Age. For all of his reverence for the great composers whose music he plays, he maintains a healthy sense of their humanity as well. “Our duty is first of all to understand what composer does and wants, and then to try to deliver it the best we can, but also to serve the music,” he says. “And maybe sometimes the composer is wrong.” He adds, “People say you must follow the text. But if you follow the text, perhaps the music is not totally served.”...And he
views what he does as a performer as an act of creation in its own right." (The Washington Post)