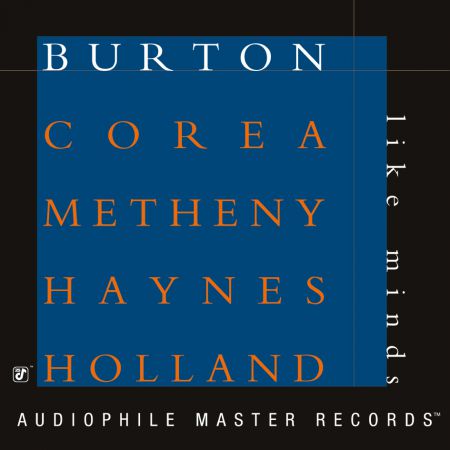 1999 Grammy Winner for "Best Instrumental Jazz Album," this blue vinyl and numbered 2-LP set with gatefold jacket has a 2 page insert and a bonus track, "Bags' Groove", written by Milt Jackson. It is half-speed mastered by Stan Ricker from the original 2-track master tapes, and plated and pressed at RTI. First time on LP!

Gary Burton has assembled his 'dream band' for "Like Minds". With his former protégé Pat Metheny, duet partner Chick Corea, favorite drummer Roy Haynes and legendary bassist Dave Holland, Burton has formed an ensemble of staggering proportions. Giants all, this is more than a collection of 'all-stars'; it is a cohesive entity. The music is performed as if by one mind and soul with five equal divisions.

The recorded results are stupendous to say the least. Original compositions by Metheny and Corea abound, as do two from Burton himself. Metheny's "Question and Answer" gets the proceedings off to a nice start as the rich sonorities provide an elegant backdrop to some fine soloing. Corea's delightful "Windows" is a deceptively intricate waltz that makes for some nice interplay between Burton and Metheny. Although he's not a prolific composer, Burton's own "Country Roads" and the jumping title track provide evidence enough that he is a master in this area as well. As an added treat, Gershwin's "Soon" shows just what masters of this stature can do with a great old standard. Finally, Corea's racing "Straight Up And Down" is a burning ending to this dream of a session.