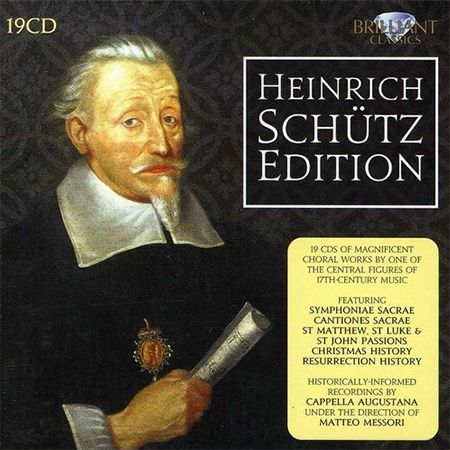 Although often overshadowed by his better-known Italian contemporary Claudio Monteverdi, as well as his successor in Lutheran music J.S. Bach, Heinrich Schütz’s contributions to 17th-century sacred music were nevertheless significant. With a career that spanned an era of great musical developments, his scared compositions reveal a rich array of influences and were to prove inspirational to future generations of composers.

This 19-disc box set is the result of four volumes of recordings made by Cappella Augustana and Matteo Messori for Brilliant Classics between 2003 and 2010, collected together for the first time. Featuring Schütz’s most important compositions (mostly large-scale works in multiple volumes), Cappella Augustana’s selection surveys the German’s lengthy career and his changing style. While the early Cantiones sacrae reflect his attempts to push boundaries as a young composer, a subtle shift towards a more simple and considered style can be witnessed in later works – notably the Kleine geistliche Concerte and Geistliche Chor-Music, a set of inventive and carefully-crafted German motets. The crowning achievement of Schütz’s career was surely his Passion settings, works that are controlled and refined yet retained a sense of drama and beauty.

The only project of its kind and the most comprehensive Schütz collection on the market, this box set benefits from authoritative performances, informed by a thorough study of the music, sources and contemporary performance issues. Focused on the most influential German composer of the 17th century, it is an essential volume for anyone interested in sacred choral music.

Other information:
- The only Schütz Edition on the market.
- A well deserved tribute to the wonderful and moving music of Heinrich Schütz, still too little known to present day audiences.
- Historically-informed recordings
- Many works on this edition have excellent reviews available.
- Complete sung texts and comprehensive booklet notes can be downloaded from www.brilliantclassics.com. 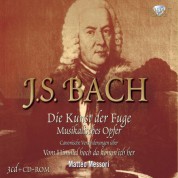 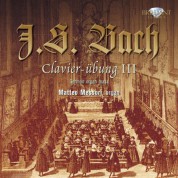 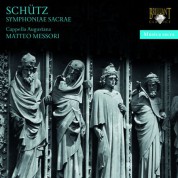