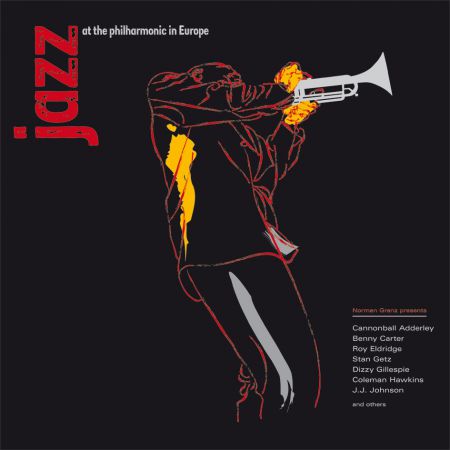 Jazz At The Philharmonic In Europe - Plak

The number of jazz fans who heard the live concert series "Jazz At The Philharmonic" must be fairly diminished by now. Nevertheless, these sessions still enjoy legendary status in the 21st century.

The concert promoter Norman Granz took his giants of jazz to Europe in the mid-Fifties. Oscar Peterson, Illinois Jacquet and Ella Fitzgerald were the great names, which caused fans in Hamburg, Berlin, Paris and Brussels to leap from their seats with enthusiasm, and in November 1960 they were followed by the encounters between young and old, and between white and black soloists. At the concert on 21 November in the packed Konserthuset in Stockholm, Coleman Hawkins, Benny Carter and Don Byas met up with Stan Getz, Cannonball Adderley, Leo Wright and J. J. Johnson – the stylistic link being provided by the two trumpeters Roy Eldridge and Dizzy Gillespie. The themes opened up new perspectives too: "Bernie’s Tune", "Kush", "All The Things You Are" and "Trotting" are clearly audible as real challenges for the old hands. And the younger musicians – several of them who were counted among the avant-garde – follow admirably in their footsteps: for example Stan Getz yet free from bossa nova clichés; Cannonball Adderley, full of soul and a funky sound; and a groovy and grooving J. J. Johnson.

Although the JATP jam sessions had undoubtedly reached their zenith in the Forties, the recordings made in November 1960 for Norman Granz’s Verve label offer a wealth of great listening and points of discussion. Never re-released, the four LPs have become true collectors’ items. Now – after almost 50 years – they are once again available for your pure enjoyment.