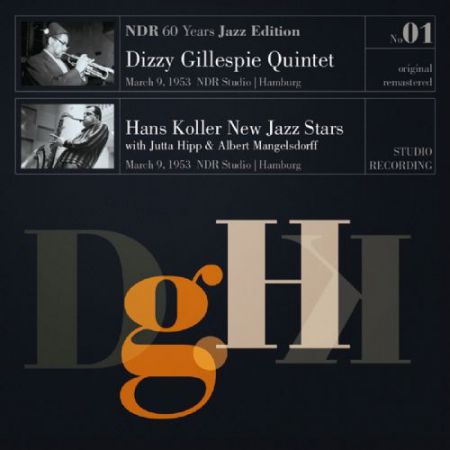 The story behind the bent trumpet

It is just a few days since the accident that gave the career of the trumpeter Dizzy Gillespie a new boost and made the main figure of this captivating Jazz history appear that bit crazier, that bit more "Dizzier". At the end of the year 1953, according to the legend, Lorraine Gillespie, Dizzy's wife, was celebrating her birthday in Manhattan; there were a lot of musicians, dancers and actors present and, after performing for the birthday girl, Dizzy's trumpet was left lying unattended on the stage while the trumpeter was outside in front of the club giving an interview. The two dancing comedians "Stump & Stumpy" (Jimmy Cross and Eddie Hartman) were capering around the stage and one of them fell on the instrument and damaged it so that the bell was bent upwards at an angle of 45 degrees. Dizzy, the story continues, tried to play the mutilated instrument and noticed just how near to his ear his own sound suddenly was, nearer at least than with a normal trumpet. He had the damaged instrument repaired, but ordered a new trumpet from a manufacturer with exactly the same kink as the accident had caused.

If all of that is true, the first jazz recording in the archive of today's NDR was played either with the repaired trumpet or with a substitute instrument 'Mister Gillespie, who came on the 9th of March 1953 with his quintet for a studio recording to Hamburg's studio 10(which at the time was merged with the Cologne broadcaster under the name of "Nordwestdeutscher Rundfunk" ' NWDR), is not only wearing ' even though there is no audience ' a decorative Tyrolean hat like the popular singing comedian and EX-GI Billy Mo; the ornately decorated trumpet he plays has no kink, it is absolutely straight (as verified in the photos by Susanne Schapowalow). The "old" Dizzy, so to speak, becomes a prominent guest on this remarkable day in Hamburg, and the "new" Dizzy has just ordered his future trade mark from the trumpet manufacturer. "60 Years Jazz in the NDR" could hardly have kicked off more auspiciously.

In 1953 John Birks Gillespie is 36 years old and a world star in Jazz. Born in 1917 in the small town of Cheraw/South Carolina, the youngest of nine children, he is known in the scene as "Dizzy" because, alongside the inventors of bebop Charlie Parker and Bud Powell, he likes to play the mad intellectual with goatee beard, Basque beret and round sunglasses. He cultivates the role of provocateur, in 1964 he even stands for election as president of the USA. However, the history of bebop has already been written when he comes to Hamburg in the spring of 1953; now the time has come for Dizzy, the spirited oddball, to reinvent himself ' until in 1968 with a grandiose big band at the Berlin Jazz Festival and from then on, again and again, he sets important milestones in a great career, including NDR concerts of course. He never switches styles and sounds as drastically as, for example, Miles Davis ' Dizzy was always Dizzy ' but ever new musical formations led up to the "United Nations Orchestra" with whom he guested in the last years before his death on 6 January 1993 all over the world including on northern German festival stages. As often as possible, the recording vans of NDR were always there.

In March 1953, Gillespie is accompanied by the baritone saxophonist Bill Graham, a musician who in the years beforehand had been part of the "Dee Gee Days", the "Savoy Sessions" (the album of this title became a classic of modern Jazz). Graham contributed not only magnificent solos in the sessions such as now in Hamburg; he also wrote "Oh-sho-be-do-be" a light-hearted ditty about the whispered conversations of young lovers which became a genuine classic in Gillespie's repertoire. At the piano in the Hamburg studio sits Wade Legge, barely thirty years old at the time, and one of the greatest but highly underestimated and unfortunately almost forgotten talents of the time. Legge's partner of many years, Lou Hackney, plays bass, and Al Jones is on percussion.

Among other places, this European tour also brought the band to Paris; they recorded five tracks on a stop at the Hamburg studio. Gershwin's "They Can't Take That Away From Me" and "Alone Together" by Arthur Schwartz and Howard Dietz are followed by two of those compositions laced with Latino rhythms that Dizzy had developed with the percussionist Chano Pozo and the arranger Gil Fuller: "Manteca" and "Tin-Tin-Deo". The short but extremely sweet program ends with "I Can't Get Started", a masterpiece for posterity written by Vernon Duke and Ira Gershwin.

The power of imagination is really not sufficient to conceive of the interaction of Gillespie's quintet with the other band in this studio session ' or how on this 9th of March what was probably the most important modern quintet in the German-speaking world performed alongside Dizzy. Hans Koller had formed the band around himself. Koller was born in 1921 in Vienna. After time spent as an American prisoner of war, in 1946 he returned to his home city to found a Jazz club, and the saxophone sound he made his own influenced at least a generation. The trombonist Albert Mangelsdorff was not even 25 years old in March 1953, and it is not so long since he swapped the guitar for the trombone as a professional musician. Jutta Hipp is the pianist. Born in Leipzig in 1935, she was regarded as the greatest piano talent of her time; her career took off vertically, but ended abruptly and tragically shortly after she moved to the USA. She never played piano again and she never returned to Germany. She died in 2003 in New York, almost completely forgotten. Shorty Roeder on bass and the percussionist Karl Sanner are the top rhythmists of their age ' and this band of twenty-somethings (Koller is the oldest at 32, and with a certain amount of bravado he christened them the "New Jazz Stars") is showing quite clearly that Jazz in Europe wants to and will take other paths than Dizzy in the motherland of the genre.

Koller selected some quite standard fare; "The Way You Look Tonight" is followed by "Indian Summer", "You Go to My Head" is followed by "All the Things You Are". Old friends, all very familiar ' but the interpretation that the quintet gives these tracks is cooler than anything considered cool or fashionable up to then in the USA. What would have been going through Mr. Gillespie's keen mind when he heard just how uncompromisingly these young Krauts and Koller were advancing the renewal of music which had begun to develop further and beyond the Dizzy standard at home in the USA ...?

Anyone in the NWDR studio in Hamburg on the 9th of March 1953 who could read minds would probably have witnessed an international dialogue, which has ever since repeatedly influenced the Jazz world. "60 years Jazz in the NDR" ' and what an event stands at the very beginning!