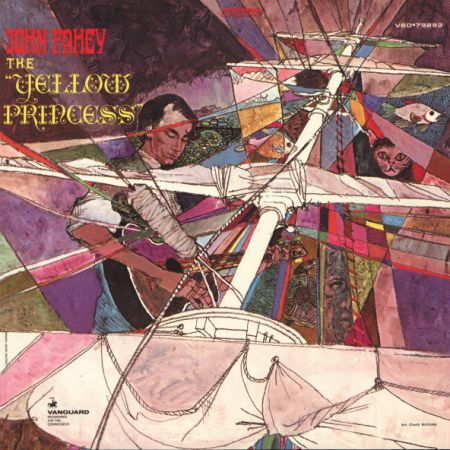 This particular John Fahey LP is a personal favourite of many of his devout fans for several reasons. And although such a judgment is tough, if one were looking to own only one album by this unique guitarist, "The Yellow Princess" could be the one. The recording sound is among the best of his many releases; at the proper volume, the effect is as if one had taken up residency inside the sound hole of a giant acoustic guitar. The program of pieces is marvellously emotional and varied, with many moments of precisely stated harmonies moving at courageously slow tempos. The second piece on the first side, "View (East from the Top of the Riggs Road/B&O Trestle)", is surely one of his masterpieces, on a par with Charles Ives for musical Americana. It is a great added bonus to have liner notes by the artist, some of the best and most absurd text he ever came up with. Yet another reason this is one of Fahey's top sides is it allows a chance to hear one of his few collaborations with other musicians. Several members of the fine rock group Spirit are present, along with drummer Kevin Kelley, for several lovely pieces, including the "March! For Martin Luther King", a remarkably heartfelt tribute that could have gone on much longer. Taped sounds and electronic effects on "The Singing Bridge of Memphis, Tennessee" certainly predict the more noisy stuff Fahey would get into in the later part of his career.