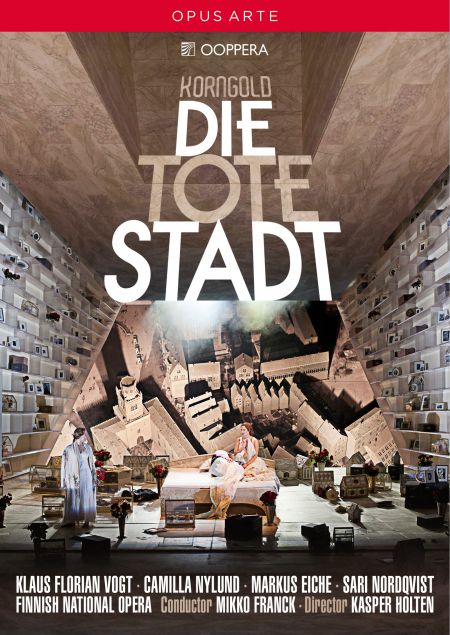 Die tote Stadt may be better known for the lushly orchestrated lyricism of its music, but the psychological acuity of its exploration of grief and memory is no less impressive from a composer who was still 23 when no less than Otto Klemperer conducted the premiere in Cologne in 1920. Korngold's gift for a tune ensured that his star has hardly waned since then, though the opera is rarely staged: Kasper Holten's insightful and restrained production is a rare chance both to see and hear an opera of high emotional charge heightened by the dark cityscape of its title. A superb cast is led by Finnish National Opera's artistic director Mikko Franck, who is celebrated for his impassioned interpretations of Romantic opera.

"Korngold’s music is marvellous throughout. Vogt ... has, besides the required stamina, also the beauty of tone and the ringing top notes to allow him to ride over the orchestra. His youthful timbre and intelligent phrasing made him the most consummate Paul I have heard, whether live or on a recording. I hope some record company has grabbed the opportunity to record this production, since Vogt was not alone in vocal brilliance. Marietta’s role is also enormously taxing, but Camilla Nylund sang it with the same assurance as Vogt, actually on a par with Katarina Dalayman’s reading in Stockholm.

Mikko Franck, Artistic Director and General Music Director of the Finnish National Opera, is a charismatic conductor and there was an extraordinary glow to the orchestra. With analytic clarity, he laid bare every strand of Korngold’s masterly orchestral colours. I regard Die tote Stadt as one of the greatest operas of the first quarter of the 20th century and the Finnish National Opera’s production makes it stand out as a true masterpiece, scenically and musically." (Seen and Heard International)
Katkıda Bulunanlar
Bu Ürünler İlginizi Çekebilir