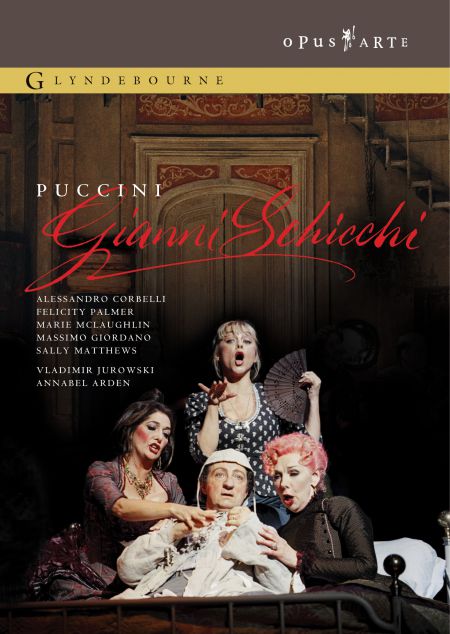 Alessandro Corbelli takes the title role in Annabel Arden’s whirlwind production of Puccini’s compact opera, in which the scheming Gianni Schicchi retrieves for himself the spoils of a disinherited family to pave the way for his daughter to marry her love.

"Alessandro Corbelli delivers a masterclass in how to extract every ounce of humour from comedy by playing it straight. He is the king of comedy and an international treasure." (The Stage)

"...conducted with flamboyant verve and mercurial comic energy by Jurowski, this is close to the perfect Glyndebourne experience." (The Sunday Times)

"Puccini's comic masterpiece comes in a production by Annabel Arden that determinedly underlines the black side of this sparkling farce. The conductor, Vladimir Jurowski, also emphasizes that point, suggesting that Puccini's construction anticipates that of the modern film in its timing and cutting of scenes...On the musical side, perfection of ensemble - for which Glyndebourne has long been famed - is at the root of this performance's success, with such characterful singers as Felicity Palmer and Marie McLaughlin among the mixed group of grasping relations. Alessandro Corbelli proves a masterly Schicchi, at once characterful, funny and sinister, and the two lovers are well taken by the tenor, Massimo Giordano, and the young soprano, Sally Matthews with her fresh, flickering vibrato." (The Penguin Guide)

"Glyndebourne has a first-rate lyric comedian in Alessandro Corbelli and a conductor who handles the music with feeling for its tenderness as well as its brio. The lovers, Sally Matthews and Massimo Giordano, bring fresh voices and good looks, and among the mean old relatives Felicity Palmer's brazen-voiced Zita is a joy. " (Gramophone)
Katkıda Bulunanlar
Bu Ürünler İlginizi Çekebilir