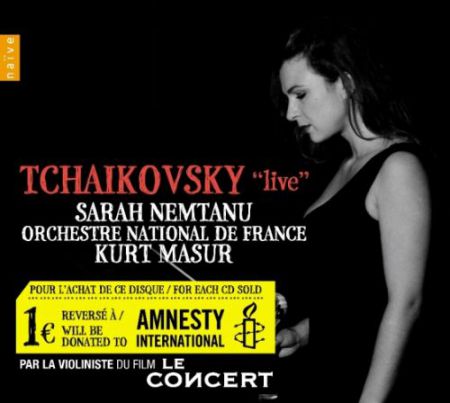 Sarah Nemtanu, renowned as a soloist and Solo violinist of Orchestre National de France, is a new naïve signing artist.

She was the "real" violinist of the film Le Concert, released in 2010 and starring Mélanie Laurent - a story around a performance of Tchaikovsky's violin concerto at Théâtre du Châtelet in Paris. So far, the film has gathered 4 million viewers in the world.

Last year, Sarah chose to record that emblematic concerto live, with the orchestra she is the leader of, conducted by the legendary maestro Kurt Masur. As Music Director of Orchestre National de France, it was Masur that hired Sarah Nemtanu as Solo violinist of the orchestra. By coincidence, this thrilling concert took place at... Théâtre du Châtelet

The concert was set up in support of the renowned association Amnesty International. This recording supports the association as well, through a donation of 1 Euro for each copy sold.

"My first encounter with Sarah Nemtanu was for me a complete surprise. Young, fresh and unconventional but also serious and experienced at an early age she auditioned for the concertmaster position of the Orchestre National de France. She was at that time twenty-one years old and many musicians on the jury wondered whether she would be capable of the artistic and spiritual leadership needed for such a position. For me, personally, she was such a 'Natural' and she was the 'one' for this position. Some musicians tried to argue that she was too young for such an important job, but I answered then that her talent was so great that in less than two years she would become undoubtedly become one of the leading musical figures in France and abroad. Now,
ten years later, I proved I was not wrong."
-- Kurt Masur 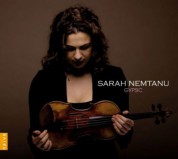