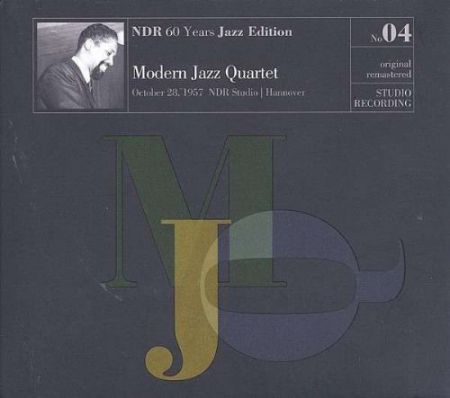 By the time the Modern Jazz Quartet made a stop at the Lower Saxony regional broadcasting station of the Norddeutscher Rundfunk in Hanover on the 28th of October 1957, the band was already a phenomenon on the jazz scene ' here in Europe and in the USA. Four black instrumentalists ' John Lewis on piano, Milt Jackson on vibraphone, Percy Heath on double bass and Connie Kay on percussion ' played a kind of jazz music whose smouldering fire and subtle swing did not quite match the idea that people in post-war Germany had of the improvised music from the United States.

"Integration" was the key word used by Lewis all his life to describe the phenomenon of MJQ (at the latest as of 1955 insiders were using this abbreviation for the Modern Jazz Quartet): finding a balance between cold intellect and hot-blooded emotion, between profound reflection and wild expression, between the language of form of the European classic tradition, that both regulates and restricts, and the eloquent oral tradition of the "black" Blues aesthetic from the USA.

A look back at the genesis of the Modern Jazz Quartet. If we think of the acoustic setting of this quartet, often described later as conservative, it may seem surprising at first glance that the germ cell of the MJQ can be found in the orchestra of the Bebop revolutionary and hothead, the trumpeter Dizzy Gillespie, of the late 1940s. In order to give his brass section a break after the instrumentally and technically highly demanding arrangements, Gillespie often extended the rhythm group by the vibraphone and had them play as a quartet, giving rise to performances by a "band within the band": with Lewis on piano, Ray Brown on bass, Kenny Clarke on drums and Jackson on the vibraphone.

Shortly afterwards this band was to become the Milt Jackson Quartet, before changing the name in 1952 to The Modern Jazz Quartet with Percy Heath on bass. But it was only in 1955 after Clarke, unsatisfied with his role as a reserved "timer keeper", left the band and was replaced by the restrained rhythms of Connnie Kay, that this band became the longest-living band in jazz history: With only one break between 1974 and 1982, the four musicians would work together as the Modern Jazz Quartets up to Kay's death in 1994 ' in the studio and live on stage.

In 1957 and 1958 the MJQ achieved its first major successes ' particularly in Germany. The quartet appeared for the first time in Europe and played more than 80 concerts: no longer in typical jazz venues, but mainly in concert halls that were the traditionally the podiums for the classical music culture of Europe. The response of the audiences to these concerts was euphoric. People were generally surprised and fascinated at the same time by the unusual presentation with which the four MJQ instrumentalists in black dinner suits performed their "restrained" improvisational music, playing a repertoire that was seldom heard in jazz in this part of the world.

And so it was on the afternoon of the 28th of October 1957 in Hanover. A special feature was that this production in the studio of the NDR-Landesfunkhaus was a repeat of a section of the concert that MJQ had given earlier in the sold-out Beethoven Hall in Hanover ' and, by the way, the first studio recording with this quartet made by a German radio station of the still young ARD.

The very first piece is a perfect example of Lewis' concept of "integration". "Vendôme", one of the early compositions for the MJQ of the classically trained pianist born in 1920, is one of those "jazz fugues" for which the quartet was already famous and celebrated in Europe. Three theme sections composed in the style of Baroque fugues alternate with three improvised solo episodes on vibraphone and piano ' plus a coda at the end that further intensifies the special atmosphere of the six parts. The formal restrictions, however, not only provide the impetus for the creative process of the soloists. Rather, Lewis' "jazz fugue" gives the MJQ musicians the possibility of leaving behind the narrow corset of theme-solo-solo-theme which was a typical feature of jazz at the time, and to play out their refined swing in a form reminiscent of European art music.

At the same time it is also clear that the contrast which emerges in the different personal styles of Jackson and Lewis is one of the constituent elements for the MJQ: the expressive, bebop-based and blues-toned improvisation art of the vibraphonist on the one hand, and the intellectual formation of the musical material by the pianist on the other. And more: in the first solo episode by Jackson, Lewis takes up the chorus entry of the vibraphonist with his piano accompaniment, spontaneously "inventing" a second voice as canon.

By 1957 there was already a selection of pieces that became typical for the band book of the MJQ. Alongside the ' let's stick with the term ' "jazz fugues" (Lewis did not only use fugues, however, but also Baroque suites, toccatas or concerti) it includes mainly standards played at a faster tempo from the "Great American Songbook", such as Jerome Kern's "All The Things You Are", sections from film scores, as were often performed by the quartet (in Hanover: "Venice" and "The Golden Striker" from the movie "Sait-On Jamais" by the French director Roger Vadim) and, as Lewis so aptly puts it in his interim moderation, "the basic ingredient and feeling of Jazz: the Blues"; with "Bluesology" as the flagship number for Jackson's instrumental class on the vibraphone.

But the actual trademark of the quartet, its compact ensemble sound that can be identified after just a few notes and beats, is clearest in the ballads. In Hanover the four musicians joined up "Autumn In New York" and "Autumn Nocturne" to a medley with the (quite appropriate) title of "Autumn" in which they celebrate the great art of the full-bodied, lyrical ballad interpretation: with Percy Heath and Connie Kay on bass and drums providing the reduced harmonious and rhythmic framework, with Jackson who, with great nobility, contributes his identification mark on the vibraphone, a slow vibrato, as an aesthetic design element, and with Lewis, who often had the keys of his piano treated with a special tincture to receive an even softer, ethereal, dabbed- on sound in the key stroke.

From a present day point of view, this somewhat different studio session with the Modern Jazz Quartet is a special opportunity to gain a new perspective on the contribution of this quartet to jazz history. Because, unlike the concert recordings from this European tour (for example in Donaueschingen shortly before the studio date in Hanover or the Gürzenich in Cologne on the 9th of November 1957), these approximately 30 minutes make one thing clear: how well prepared and professional the four MJQ musicians were in what was not an everyday task for them, to reconstruct in the isolation of the sound studio one of their concerts (without an audience) ' including Lewis's explanatory commentary. And also how well they were able to work with the technical crew of the Norddeutscher Rundfunk ' always at eye level, without airs and graces. 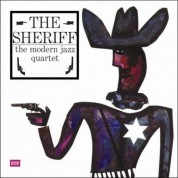 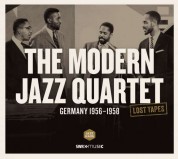 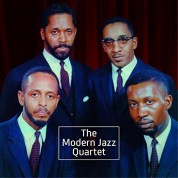 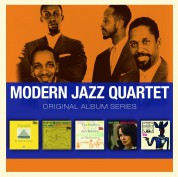