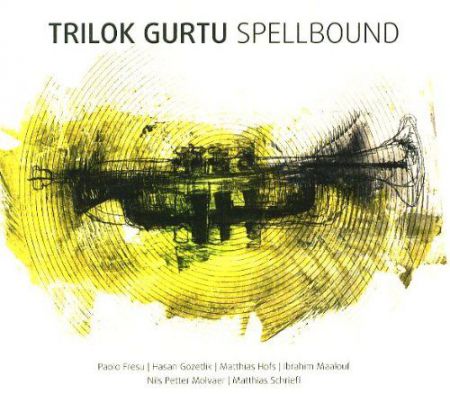 Spellbound' by the acclaimed Indian percussionist Trilok Gurtu features an all-star lineup of trumpeters from around the globe - including Nils Petter Molvaer, Paolo Fresu and Ambrose Akinmusire - performing compositions by Miles Davis, Dizzy Gillespie and Don Cherry, seamlessly interwoven with Gurtu's own originals.

The stellar array of trumpeters includes Nils Petter Molvaer from Norway, Paolo Fresu from Italy, Ibrahim Maalouf from Lebanon, from America Matthias Schriefl and the classical trumpeter Matthias Höfs from Germany and Hasan Gözetlik from Turkey.

Well-known for his eclectic output it is unsurprising that Gurtu has now chosen to return to jazz and improvised music with such a veritable line up of talent. Throughout his career, he has always envisaged his work as 'music without borders' and he has never worried about stylistic boundaries. This is still very much in evidence on 'Spellbound' and is exemplified by the diverse choice of musicians. The choice of trumpet is also apposite as it was trumpeter Don Cherry who first gave him encouragement to pursue his dream when the young Trilok Gurtu arrived in Italy from his homeland of India in the early 1970s.