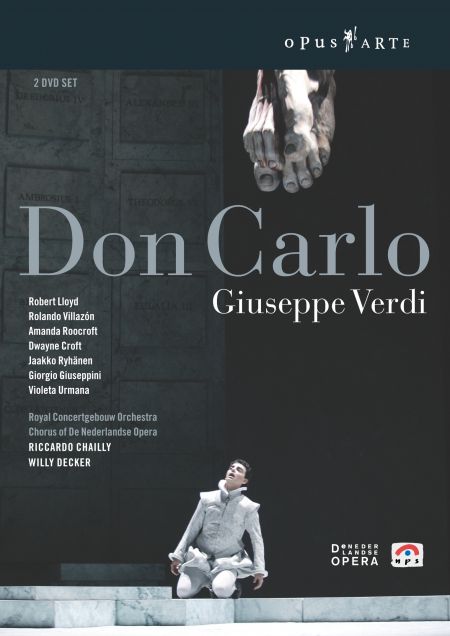 In this majestic production of Verdi’s Don Carlo, Riccardo Chailly’s qualities as a Verdi conductor are brilliantly displayed in the dramatic precision and transparent instrumental detail he draws from both orchestra and cast. Willy Decker directs a wonderful piece of stagecraft, letting the tragedy unwind with minimal, yet telling, interventions. The drama takes place in the mausoleum of Filippo II’s Escorial, where the tombs of countless generations of Spanish royalty line the walls. Filippo’s confrontation with Il grande inquisitore - which takes place over his own coffin, its resting place in the wall ready and waiting - is chillingly symbolic, as are the feet of the giant crucifix that hangs over Don Carlo as he sees his life sacrificed by his father.

"...a fabulous summation of Chailly’s qualities as a Verdi conductor...a wonderful piece of stagecraft..." (The Guardian)

"...Croft is marvellously skilled, in the tradition of American baritones decades ago. Ryhänen is magnificent..Villazón...displayed a superb voice, rich phrasing and energetic acting..." (Opera)

"Rolando Villazón confirms that he’s all set to become one of the best tenors of his generation...Villazón strikes me as the best young romantic tenor to have emerged since Carreras’s youthful glory days...I have never heard Carlo’s music sung with such a combination of vocal glamour, musical refinement and brooding machismo in the theatre..." (The Sunday Times)
Katkıda Bulunanlar
Bu Ürünler İlginizi Çekebilir